Here are some answers to the most common questions I receive.

Is this an Official Project from the creators of OBS Studio?

No, this is a unaffiliated project by a third party.

OBS Studio provides a plugin API that has been used to create a third party plugin for OBS Studio. Please do not contact the creators of OBS Studio for support.

What iOS hardware do I need?

When using the NDI Connection method - you can use any device that is running iOS 9 and later.

When using the USB Connection method - the app works best for devices released in 2016 and later. This includes the following devices.

Find out which iPad model you have.

Why 2016 and later?
We have identified an issue with earlier devices when encoding the video on device that can potentially cause issues during use. Because of this, we do not recommend using the app with devices earlier than those listed above.

How do I uninstall the plugin?

The plugin is installed in the following folder

To quickly open this folder, open Finder.app and select from the menu Go > Go to Folder... and enter the path above.

The plugin is installed in the following folders:

How can I stream in landscape mode?

Make sure your iOS devices rotation lock is disabled. Then with the app running, simply rotate your phone landscape and the video will switch to landscape mode.

If the video doesn't turn horizontal still, then this is a symptom that you're not using the iOS Camera source to connect to the device. See this for more.

How can I change the output resolution?

Tap the settings icon in the app, then tap on a resolution and framerate of your choice. Be careful though, high framerates and resolutions may put your system under stress and not be able to be decoded in realtime. I'd recommend sticking at 720p30, 720p60 or 1080p30.

You might have more luck than my old MacBook Pro though 🙂

Is Camera for OBS Studio compatible with Streamlabs OBS?

Kinda. You'll have to use the NewTek NDI WiFi connection method, and read about NDI and Streamlabs OBS.

Unfortunately you can't install any old OBS Studio plugin into Streamlabs OBS so the low latency USB Connection method will not work. You can try and upvote this issue and see what the devs say. https://ideas.streamlabs.com/ideas/SL-I-4830

Can I use this in other applications, such as Zoom?

Unidentified Developer error when installing the plugin on macOS

As of version 2.5.1 of the plugin, this won't happen. Make sure you download the latest version of the plugin from this website.

Yes we do support RPAN.

Install the package for OBS Studio as explained on the getting started page. Go to the /Library/Application Support folder. You can use the Finder, via Finder > Go > Go to folder..., create a new folder named rpan-studio. Copy the content of the obs-studio folder inside the rpan-studio. Make sure to restart RPAN.

Install the plugin for OBS Studio as explained on the getting started page. Copy each file listed below to their respective new folder

Bitrate is the amount of data encoded for a unit of time, a higher bitrate (20k-60k) works best on newer devices. A higher bitrate will reduce the CPU usage required to encode and decode each frame. As everyone is running a different setup we recommend to trial and error different values.

What is Keyframe Interval?

Keyframes are points in the video where the entire frame is sent instead of just the differences from the previous frame. Having a keyframe interval of 30 frames that it takes 1 second for the viewers to catch up to a point where they can properly display the feed (if recording at 30 frames per second). If you are experiencing some freezes with older devices, we recommend lowering the Keyframe Interval.

How many devices can I use with a subscription?

You can use up to 5 devices using one subscription. Make sure use the same App Store account between all your devices. Use the Restore button to recover your previous subscription.

Do you offer a Volume Purchase Program (VPP) option?

We do offer a VPP option however it is only accessible via request. Email us your Organzation ID and Name while making sure it matches Apple's record. If you are not sure how to find your Organization ID you can find more details here. You can contact us directly here.

After updating OBS Studio to 27.2 the iOS Camera plugin fails to load

Please update the iOS Camera plugin to v2.9.0, available to download from the getting started page here.

There is no 'iOS Camera' option in OBS Studio

You will need to install the plugin for OBS Studio to see the iOS Camera source. This is detailed in the Getting Started Guide.

Make sure that you're using a supported operating system. Currently supported are MacOS 10.13+ and Windows 8+.

If after running the installer you cannot see the 'iOS Camera' source, please try to install the plugin manually by following the guide here

If that doesn't work, please send us a copy of the OBS Studio logfile and we'll help debug the issue. You can find the log file in OBS Studio's menu.

You will need to unplug your device, force quit the app on the iPhone and launch it again.

⚠️ If that fails, (and you're on Windows) open iTunes (and keep open) before opening OBS Studio.

Are you using a third party cable, extension or USB hub?

I'm on Windows and my iOS device isn't connecting

Make sure you've installed iTunes. On Windows iTunes provides the service to communicate to your iOS device over USB. iTunes doesn't need to be running, but does need to have been installed and run at least once.

OBS Studio crashed after plugging in my iPhone

If OBS crashes after adding the iPhone Camera source to your scene, try again and make sure to follow the instructions at the top of this page. I've experienced this issue and it always works the second time - I know this isn't good enough, and I'm looking into the cause of this issue.

How do I remove the app's buttons (user interface) from the video stream?

If you see the applications buttons in the video preview after connecting your device and OBS Studio looks like the image below, then we've not setup the connection correctly.

What you must do is install the plugin, and then use the iOS Camera layer.

If you don't see the iOS Camera source, you might not have installed the iOS Camera Plugin. We have a Getting Started Guide for details, and another question for other solutions.

Is the app disconnecting when using multiple scenes in OBS Studio?

If you're using multiple scenes in OBS Studio and you find that switching scenes is causing the iOS Camera source to disconnect from the device, we're going to have to use 'reference' copies in each scene.

If you don't need the iOS Camera visible in the second scene then you can hide the iOS Camera source in that scene. It simply needs to exist to ensure the connection is kept alive.

The paste (by reference) ensures that each copy of the iOS Camera source points to same one, which ensures that the connection is maintained when switching scenes.

How do/Can I use multiple cameras?

You can use as many devices as you'd like. While there is no fixed upper limit, the maximum number depends on your computer setup. I have used three devices at the same time - which is the number of devices that I've been able to use at any one time.

Using multiple cameras is just like using one camera. You add another iOS Camera source to your scene, and select the second device.

Note: After adding the second device you may have to open up the settings of the first iOS Camera source and tap the reconnect button. This is a known issue. 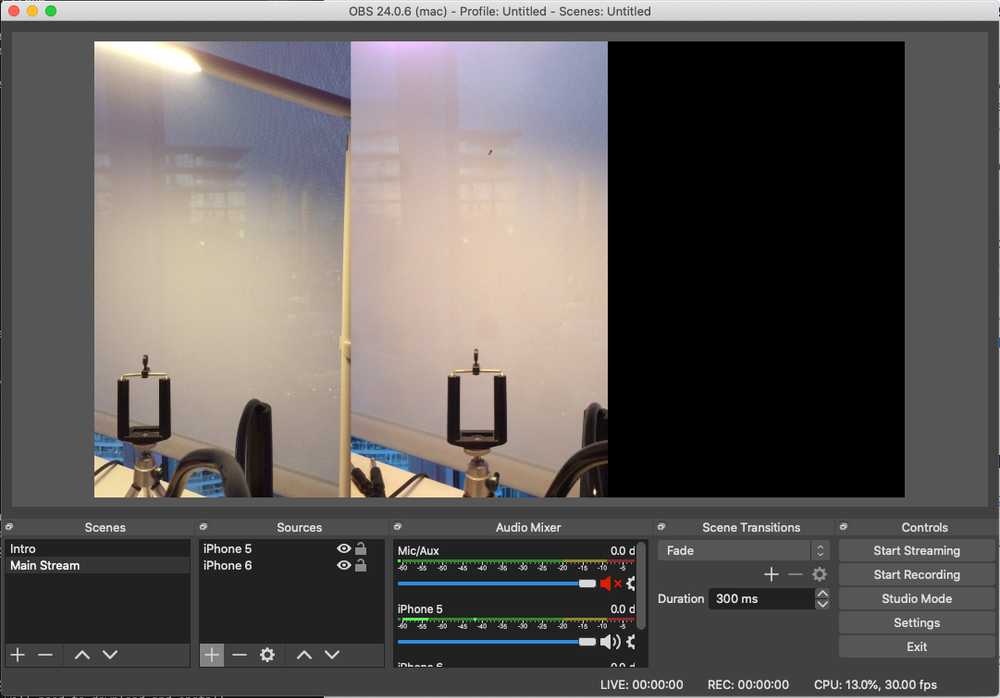 Make sure you've updated the plugin from getting started page as Audio support was added in v2.2.0 (of the plugin and the iOS App) and above. You will need to download and install the new version of the plugin if you've installed the plugin previously.